Benjamin Carter Hett-The Death of Democracy: Hitler's Rise to Power and the Downfall of the Weimar Republic 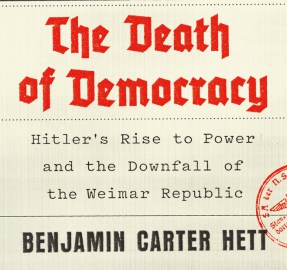 Please join us at Roosevelt House as we welcome Benjamin C. Hett, professor of history at Hunter College and the Graduate Center, to mark the publication of his new book, The Death of Democracy: Hitler’s Rise to Power and the Downfall of the Weimar Republic. Professor Hett will discuss why democracy fell apart so quickly and completely in Germany in the 1930s, and how a democratic government allowed Adolf Hitler to seize power.

In Hett’s view, it is too simple to say that Hitler was elected. As Hett argues, Hitler would never have come to power if Germany’s leading politicians had not responded to a spate of populist insurgencies by trying to co-opt him, a strategy that backed them into a corner from which the only way out was to bring the Nazis in. In his talk Professor Hett will examine the misguided confidence of conservative politicians who believed that Hitler and his followers would willingly support them, not recognizing that their efforts to use the Nazis actually played into Hitler’s hands. They had willingly given him the tools to turn Germany into a vicious dictatorship.

Publishers Weekly says that The Death of Democracy “persuasively challenges familiar arguments that the rise of Nazi Germany was an inevitable consequence of abstract forces,” and calls the book a “page-turning account.”

We hope you will be able to participate in this timely discussion.