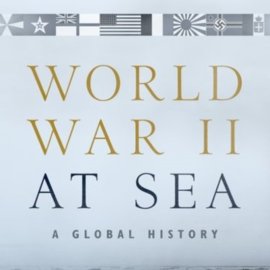 Please join us at Roosevelt House as we welcome Craig L. Symonds, one of America’s most acclaimed naval historians, to mark the publication of his new book, World War II at Sea: A Global History, a complete narrative of the naval war and all of its belligerents, on all of the world’s oceans and seas, between 1939 and 1945. Symonds, Professor Emeritus at the United States Naval Academy, will be in conversation with Harold Holzer, the Jonathan F. Fanton Director of Roosevelt House.

Professor Symonds, whose previous books include Lincoln and His Admirals, winner of the Lincoln Prize, and The Battle of Midway, named the best book of the year by Military History Quarterly, offers a global perspective on the war, focusing on the scale and interconnection of all the major engagements, including Pearl Harbor, Midway, the landings in North Africa and then Normandy, as well as small-scale assaults and amphibious operations. Symonds also draws fresh portraits of the roles and personalities of the notable naval leaders of all nationalities – F.D.R. and Churchill, as well as Karl Dönitz, Isoroku Yamamoto, and other Allied and Axis commanders. Symonds combines precision with story-telling verve,  illuminating not only the mechanics of large-scale warfare on – and below – the sea, but offering insight into the unique nature of World War II itself.