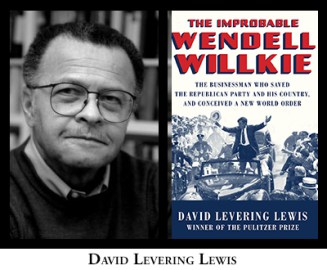 Please join us at Roosevelt House as we welcome the distinguished historian David Levering Lewis, who will discuss his new book, The Improbable Wendell Willkie: The Businessman Who Saved the Republican Party and His Country, and Conceived a New World Order, a biography of the businessman–turned–presidential candidate who ran against Franklin D. Roosevelt in 1940.

Lewis, two-time winner of the Pulitzer Prize for his two-volume biography of W. E. B. Du Bois, will discuss the ways in which Willkie, despite his loss to FDR, was one of the most exciting, intellectually able, and authentically transformational figures in twentieth-century American history.

Willkie took on Roosevelt during one of the nation’s darkest periods, creating an unlikely alliance of supporters, including anti-big-government business leaders and black voters, who rightly felt excluded from New Deal benefits. Yet after his defeat, Willkie reconciled with the president and embraced the war effort, and wrote One World, a visionary credo that hoped to instigate an international movement for the betterment of the world’s people. His untimely death at fifty-two in 1944 left his vision tragically stillborn.

Thomas Mallon, writing in The New Yorker, praised The Improbable Wendell Willkiefor bringing “the now largely unknown Willkie to a new generation…. The book largely succeeds, suggesting a figure―again, like Reagan―both sunnily approachable and weirdly elusive; one who seems to require imaginative projections.”