David Margolick – The Promise and the Dream: The Untold Story of Martin Luther King, Jr. and Robert F. Kennedy 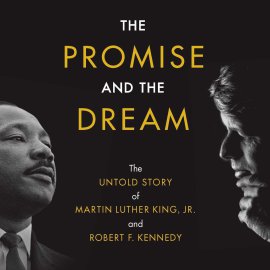 Please join us at Roosevelt House as we welcome noted journalist David Margolick to discuss his acclaimed book, The Promise and the Dream: The Untold Story of Martin Luther King, Jr. and Robert F. Kennedy, an exploration of the complex and ever-evolving relationship between these two American icons, assassinated only sixty-two days apart in 1968. Margolick will be in conversation with Budd Mishkin, long-time host of “One on 1 with Budd Mishkin,” on NY1.

No issue in America in the 1960s was more vital than civil rights, and no two public figures were more crucial in the drama of race relations in this era than Martin Luther King, Jr., and Robert F. Kennedy. King and Kennedy had a vital, but as Margolick argues, a frequently misunderstood relationship. Both changed the United States forever, and their deaths profoundly altered the country’s trajectory. In The Promise and the Dream, Margolick examines their unique bond and the complicated mix of mutual assistance, impatience, wariness, awkwardness, antagonism, and admiration that existed between the two, documented with original interviews, oral histories, FBI files, and previously untapped contemporaneous accounts.

The New York Times Book Review praised The Promise and the Dream: “To have any hope of making sense of it all, we need a discerning… work that not only identifies the most important events of 1968 but also puts them in historical context…. This is what David Margolick [gives] us … an engaging work of popular history.”