From Cold War to Hot Peace: An American Ambassador in Putin’s House 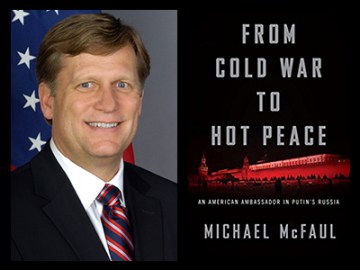 Roosevelt House welcomes Michael McFaul, who served as U.S. ambassador to Russia during the Obama administration, to mark the publication of his new book, From Cold War to Hot Peace, his inside account of U.S.-Russia relations from 1989 to the present.

McFaul, one of America’s leading scholars of Russia, left his position at Stanford to join an unlikely presidential campaign – and soon found himself at the center of one of today’s most contentious and consequential international relationships. As President Obama’s adviser on Russian affairs, McFaul helped craft the U.S. policy known as “reset” that fostered new and unprecedented collaboration between the two countries. And then, as U.S. ambassador to Russia from 2012 to 2014, he witnessed the changes brought about by Vladimir Putin’s return to the presidency.

McFaul’s book combines history and memoir, and at Roosevelt House he will not only discuss U.S.-Russia relations from the fall of the Soviet Union to the rise of the new, more hostile, Russian president; he will explore as well as the ways in which, from the start of his own ambassadorship, the Kremlin actively sought to discredit and undermine him, including sending protesters to his front gates, slandering him on state media, and ordering constant surveillance of him, his staff, and his family.