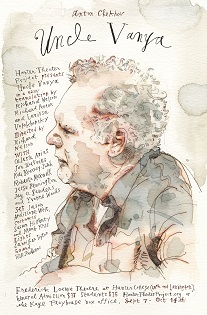 In its inaugural production, the Hunter Theater Project presents the New York premiere of Anton Chekhov's UNCLE VANYA at the Frederick Loewe Theater at Hunter College, directed by  Richard Nelson. Translated by Richard Nelson, Richard Pevear, and Larissa Volokhonsky. This production is the first time renowned Russian literature translators Pevear and Volokhonsky will have a work premiere in New York City. The production runs through Sunday, November 18.

“Lovers of Chekhov have cause for celebration: This is one of the most exquisite renderings of Uncle Vanya

I've encountered, a heartbreaking reading of the play that retains just enough

of the original's sly humor to be truly Chekhovian.”

“It has taken a playwright to show us how Chekhov can be staged today.

such an enduring work of dramatic literature.”

To make a donation to the Hunter  College Theater Project

At the Frederick Loewe Theater at Hunter College. Please note: LATECOMERS WILL NOT BE SEATED ONCE THE PERFORMANCE HAS BEGUN DUE TO THE AUDIENCE CONFIGURATION.

The entrance is on East 68th St. between Park and Lexington Avenues, near Lexington