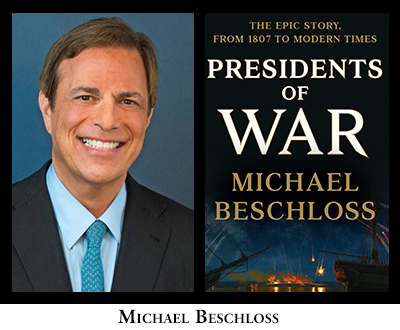 Please join us on Tuesday, October 30, for a very special evening at Roosevelt House as award-winning presidential historian Michael Beschloss joins us to discuss his brand-new book, Presidents of War, a magisterial account of how our commanders-in-chief have led the military into, and through, armed combat against both foreign and domestic enemies over the course of two-and-a-half centuries of history. Through deep research and new interviews, Beschloss covers a range of wars and leaders, from Madison, Lincoln, Wilson, FDR, and LBJ, all the way to George W. Bush. The Wall Street Journal hailed the book as “valuable” and “engrossing,” and The New York Times called it a “sweeping…marvelous narrative.”

You will particularly want to hear Beschloss’ fresh view of Franklin Roosevelt’s wartime leadership—from his response to the attack on Pearl Harbor to his controversial decision to pursue Japanese internment to his remarkable knack for blocking Congressional interference and inquiry.

Beschloss is the official presidential historian for NBC News and a regular contributor to the PBS News Hour. His previous bestsellers include The Conquerors and Presidential Courage, as well as Taking Charge and Reaching for Glory, his acclaimed edited volumes of the Lyndon Johnson White House tapes.

*If this event is sold out, you may tune in via Livestream