Hunter's 216th Commencement: Celebrating Graduates Who Will Change the World

Hunter College’s 216th commencement began with the rousing bellow of bagpipes as Hunter’s North Assembly Hall stage filled with graduates. With more than 150 countries and five continents represented by the Class of 2018, the ceremony was a celebration of diversity and aspiration. Lily Deng '18, one of the class salutatorians, kicked off the afternoon by saluting all of her classmates: "You have made it!"

Hunter President Jennifer J. Raab introduced CUNY Trustee Lorraine Cortes-Vazquez '75— a Hunter graduate herself and a member of the Hunter Hall of Fame. Cortes-Vasquez commended the students on their hard work and determination, "It's a special honor to be with you on this very special day in your life," she said, urging them to use their newly earned degrees to make a difference in their communities. "It is crucial that you stand up for those who do not have a voice. Silence does not change the world; actions do. And we know that Hunter graduates are never silent."

New York Secretary of State Rossana Rosado, who has had an illustrious career in publishing and public service, delivered a moving commencement address. "Not so long ago I was here in the audience as the proud parent of a Hunter graduate," she began. Speaking directing to the parents and families in the audience, she added, "Congratulations on helping these students get to the finish line. Today is also your day."

Rosado went on to talk about her experiences in journalism, as a woman and a minority. "I found my journalistic voice in the first place because another path was cut short for me; I was told I couldn't be an English major because I had too much of an accent." She disagreed with that assessment, of course, but took the setback in stride. "For every No  I got in my life, I not only worked hard to prove them wrong, but told them they were wrong."

Rosado's career dates back to the early '80s, when, she said, she began covering stories that needed to be told but were not reported in the mainstream press. She told the graduates that when she became the first female editor of El Diario, the largest Spanish-language newspaper in America, "I made an effort to hire more women, to create spaces for people whose voices were deemed unimportant." She reminded the students of the important role they'll play in society, and of the tremendous contributions historically made by the children of immigrants and underrepresented populations. Like Cortes-Vazquez, Rosado urged the Hunter graduates to realize their own strengths. "We need your voices to rise. Many of your families left their homes and everything they knew to give you access to opportunity. Take ownership of your story. Speak it and share it." 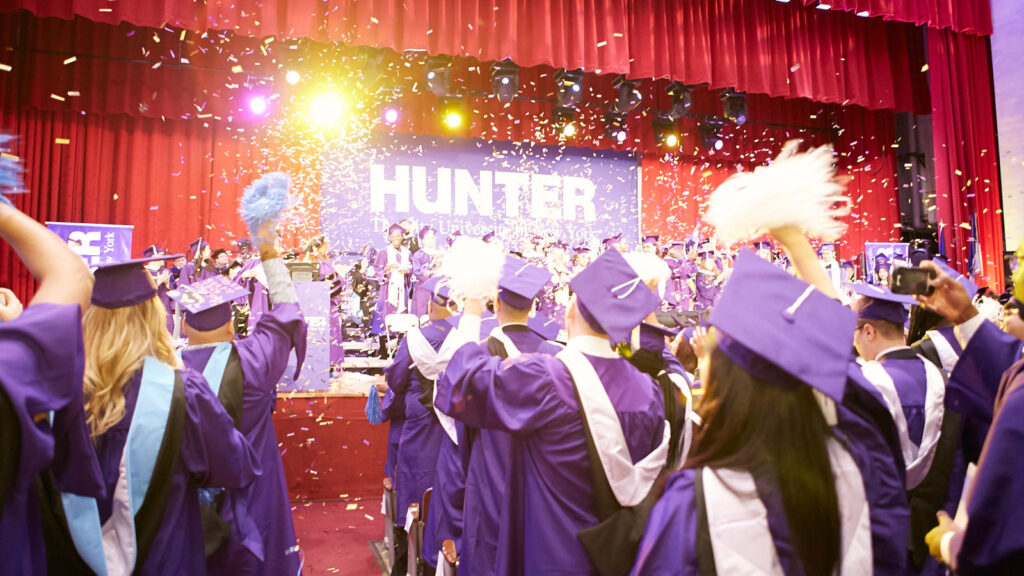 The two class valedictorians, each of whom achieved a perfect 4.0 GPA, were aptly personified young people determined to use their voices and talents to contribute to the world. One valedictorian, Ryan Schulte ’18, received his bachelor of arts in English with a minor in Africana & Puerto Rican/Latino Studies. He and plans to write and teach, and constantly strives to give back to his community. His immediate post-graduation plan is to finish a book of short stories—while volunteering on an organic farm in Ireland.

Valedictorian Jack Jnani '18, a chemistry major who won 10 scholarships while completing his studies, gave the valedictory address. "As the son of working class immigrants, I, like many of my classmates, had a small beginning but many hopes and dreams," he said, paying special tribute to parents who fled anti-Semitism in Syria to start new lives in America. Now, as their eldest son heads from Hunter to medical school he credits Hunter with preparing him "to help alleviate disease and suffering throughout the world."

In conclusion, Jnani hailed Hunter’s diversity, the special campus environment that includes and welcomes people of all races, religions, classes, ages, and gender identities, saying: “My message to my fellow graduates: We must strive to carry forward all of the amazing values that Hunter has given us."

As confetti flew through the air, President Raab announced the official news: now students could not only switch the direction of the tassels on their hats, they could switch their Facebook profile status from Hunter students to Hunter alums.

Congratulations to the Class of 2018: the care of the future is yours.