Jessica Neuwirth receiving the insignia of the Knight of the National Order of the Legion of Honor from Jérémie Robert, the Consul General of France in New York.

Jessica Neuwirth, the Rita E. Hauser Director of the Human Rights Program at The Roosevelt House Public Policy Institute at Hunter College, received the insignia of “Chevalier dans l’Ordre National de la Légion d’Honneur”—Knight of the National Order of the Legion of Honor—from the Consul General of France in New York, Jérémie Robert. The recognition cited Ms. Neuwirth’s “major contributions to gender equality, and more broadly, justice for all.”

Neuwirth has served as the Hauser Director of The Roosevelt House Human Rights Program since 2018. After obtaining a law degree from Harvard Law School, she worked as a legal advisor for Amnesty International. This experience inspired her to create Equality Now, an international organization that has played a vital role in both fighting violence against women and gender discrimination.

Neuwirth served as a Special Advisor on sexual violence to the UN High Commissioner for Human Rights and to the International Criminal Tribunal for Rwanda. She was co-founder of the ERA Coalition advocating an Equal Rights Amendment to the United States Constitution. In each of these roles, Neuwirth brought her extensive knowledge of international law to push the legal systems in the US and other countries in a more equitable direction. She also founded Donor Direct Action, a fund for women that has raised $4 million to support front line women’s rights organizations around the world. 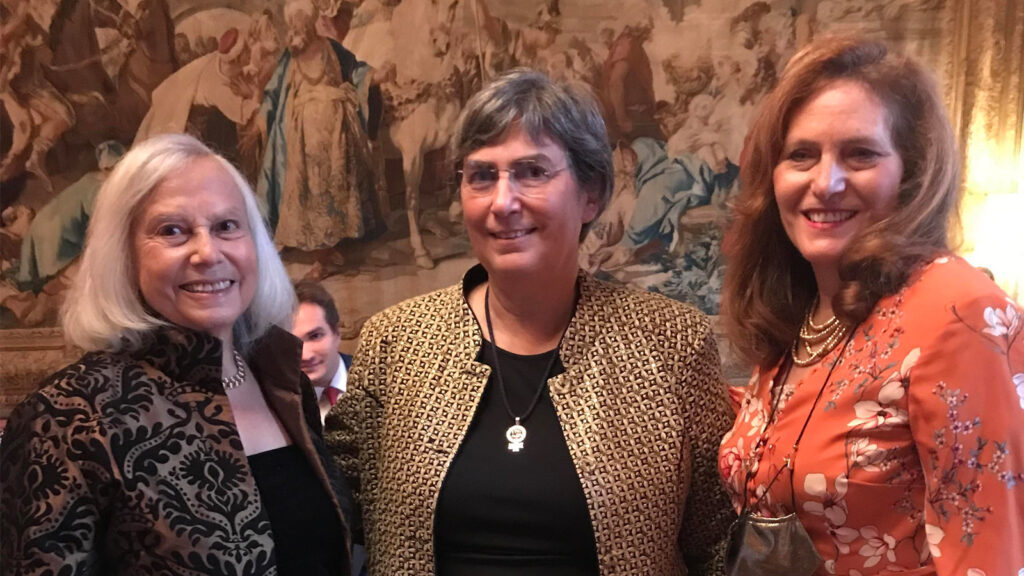 The October 5th ceremony was held at the French Consulate in New York in the presence of family and friends, including the American feminist writer and political activist Gloria Steinem, Hunter College President Jennifer J. Raab, Deputy Executive Director of UN Women Asa Regnér, and Congresswoman Carolyn B. Maloney.

“All of us at Hunter College are immensely proud of our colleague Jessica Neuwirth and congratulate her on receiving this great honor,” said President Raab. “It is yet another indication that Jessica’s human rights achievements are significant, and her reach, global. I know her faculty and students join me in saluting our gifted Rita Hauser Director of Human Rights at Roosevelt House.”

In her tribute to Neuwirth, Gloria Steinem said, "Jessica Neuwirth is a name that quietly and consistently, from the halls of the United Nations to meetings of rural women in Africa, inspires trust and confidence. A compassionate organizer and an expert in international law, she is a leader for women of the world."

According to Mr. Robert, the prestigious distinction is an expression of the deep gratitude that the French people have for Americans who contribute to the advancement of gender equality, one of the priorities of President Macron’s five-year term. Mr. Robert thanked Ms. Neuwirth for her contributions to women and human rights, which, he noted, perfectly align with France’s social and political vision.