When newly appointed Hunter president Jennifer J. Raab arrived at the College in 2001, one of the first people she consulted was economist and educator Anita Summers ’45. Summers was instrumental in encouraging President Raab to invest in renovating Roosevelt House, which had been home to Franklin and Eleanor Roosevelt before Hunter purchased it in the 1940s. The landmark property had fallen into deep disrepair, closing its doors to the public in 1992. When it reopened in 2010, Summers’ counsel proved vital again, as she advised the College to establish the renovated House as a public policy institute that would honor the Roosevelts’ legacy. So it was fitting that her son Larry Summers—former president of Harvard University and himself a renowned economist—chose to name a room in Roosevelt House for his mother as a way to honor her.

On October 11, 2018, a group of friends, colleagues, and Hunter community members gathered alongside Anita on the second floor of Roosevelt House to dedicate the Anita Summers Reception Room and Gallery. The room has a storied past; in the 1930’s it was used primarily by Eleanor Roosevelt as a holding space for the swarm of reporters who gathered in the streets outside the townhouse doors. Franklin, who had won the presidency but would not be inaugurated till March, was working from home in the meantime, so the assembled press needed somewhere to escape the cold New York winters. Eleanor welcomed them into the second floor parlor. It was fitting, said President Raab, to name an area of “hospitality and warmth” for Anita Summers.

During the naming ceremony, that same hospitality and warmth were directed towards Summers, her children, and her grandchildren, who assembled to celebrate Anita’s life and career. Hunter has honored Summers before: She was inducted into the Hunter Hall of Fame, and received an honorary Doctorate of Humane Letters in 1995. 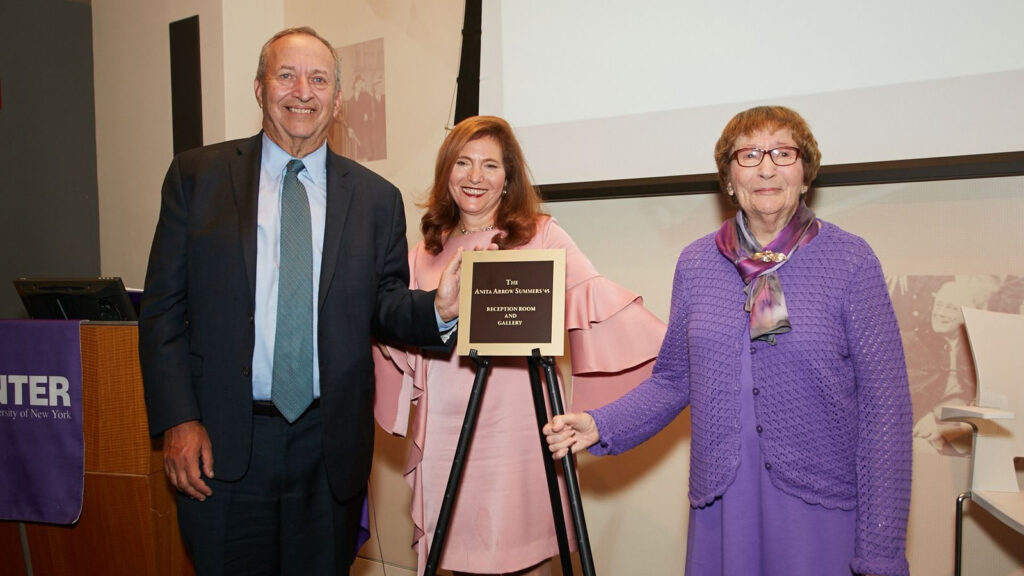 The daughter of Romanian immigrants, Summers comes from a family that treasured intellectual discourse: “Education was revered in my family,” she said. It wasn’t until Hunter College, however, that she discovered her passion for economics and public policy. When she took her first courses in economics and statistics, she said at the ceremony, “something clicked.” Her teacher, she recalled, “combined demanding standards with genuine personal mentoring...values that became central to my professional interests as the years unfolded.” She went on to earn a doctorate at Columbia at a time when few women pursued academic scholarship at that level, and she later became the first woman to serve as an economist for a major international corporation. She was advisor to five Philadelphia mayors, spurring a nationwide movement advocating for performance-based education. A prestigious post at the Wharton School followed when Summers was tapped to lead the first department of public policy at an American business school. She became one of the nation’s leading authorities on urban economic development and educational efficiency.

Recounting Summers’ career, President Raab described Anita as “one of Hunter’s most distinguished graduates.” And then, in a nod to Summers’ intellectual rigor and wide-ranging social interests, the ceremony presented a panel on “The Future of American Economic Policy” featuring some of the most celebrated economic minds in the nation. Moderated by Larry Summers, the panel—which included Nobel Prize winner Robert Solow and former U.S. Secretary of the Treasury Robert Rubin—explored the current state of national affairs, and the challenges it presents in the both long and short term.

When the floor opened for questions, Dr. Summers took the microphone and brought the conversation back to the Roosevelts. Urging our educational system to revitalize civics education, she also called for a national revival of the Roosevelts’ commitment to “caring about those in the shadows of life.” With greater emphasis on ethics and the true meaning of equality, she argued, the “maldistribution of income that we have” in society might begin to correct itself.

Those were, after all, the values that she learned at Hunter: “My education influences every day of my life, because it taught me to keep wanting to learn and to help others keep learning.”