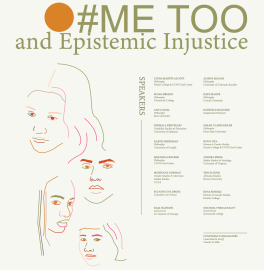 The CUNY Graduate Center Advanced Research Collaborative (ARC), the Center of the Humanities, and the Philosophy Program present and interdisciplinary conference on #MeToo and Epistemic Injustice. Over the past year, the #MeToo movement has forced into national consciousness what has long been an underground truth known by women: the horrifying pervasiveness of sexual harassment and assault as routine everyday occurrences, largely unpunished. How can one explain the resistance there has traditionally been, as recently brought out in one high-profile case after another, to taking women’s testimony seriously? Using Miranda Fricker’s innovative concept of “epistemic injustice” as a focus—the refusal to give members of subordinated groups a fair hearing—this 2-day interdisciplinary conference will examine the problem in its multiple dimensions. Eighteen theorists from a wide variety of subjects—philosophy, political theory, media studies, history, gender and women’s studies, LGBTQ theory, Africana and Native American studies, law, and disability theory—will look from their distinctive perspectives at women’s vulnerability to sexual harassment and assault, and the ways in which it is complicated by class, race, nationality, sexuality, and disability.