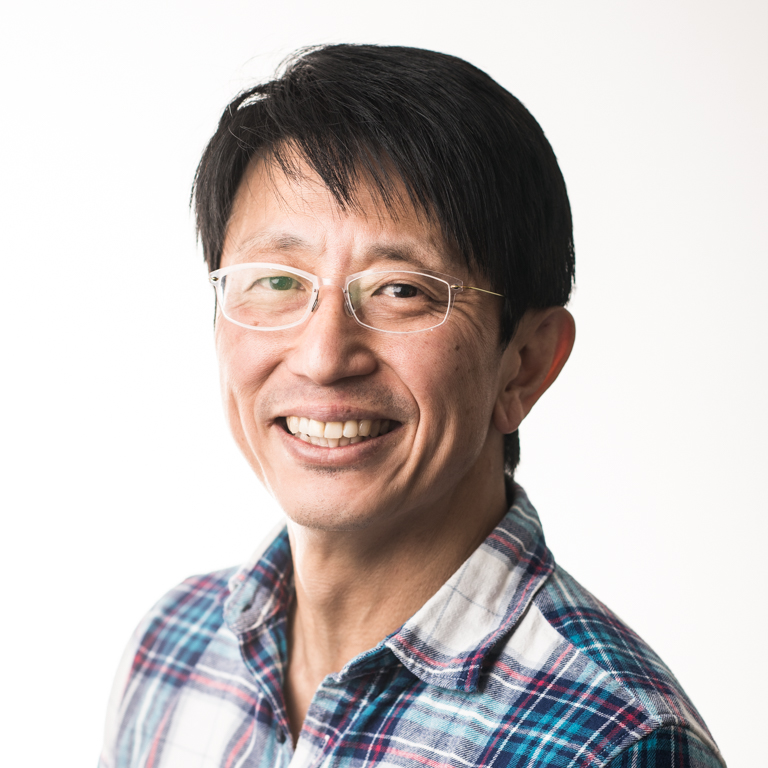 Dr. Matsui's laboratory has focused much of its recent activity on developing a novel methodology to produce nanoparticles in complex shapes via the galvanic exchange reactions (Nature Commun., (2014) 5, 3870). When iron oxide nanoparticles were engineered in a cage-shape (IO-nanocage) with a size less than 20 nm by this technology and anticancer drugs were carried inside the cavity (Fig. 1-a), the cytotoxicity of anticancer drugs delivered by the IO-nanocage carriers is enhanced more than four-fold as compared to conventional drug delivery methods due to the characteristic cage shape (Nano Lett., (2016) 16, 7357-7363). Recently, this hollowing nanomaterial engineering approach was also applied to generate iron oxide nanotubes (RSC Adv., (2020) 10, 38617-20). For example, IO-nanocages could passively deliver anti-cancer drugs of Riluzole to tumor sites in xenografted animal models and reduced the size of tumor as the shape and size of nanocages are designed to enter leaky tumor-specific blood vessels as shown in Fig. 1-b (Oncology Rep., (2020) 43, 169-176). 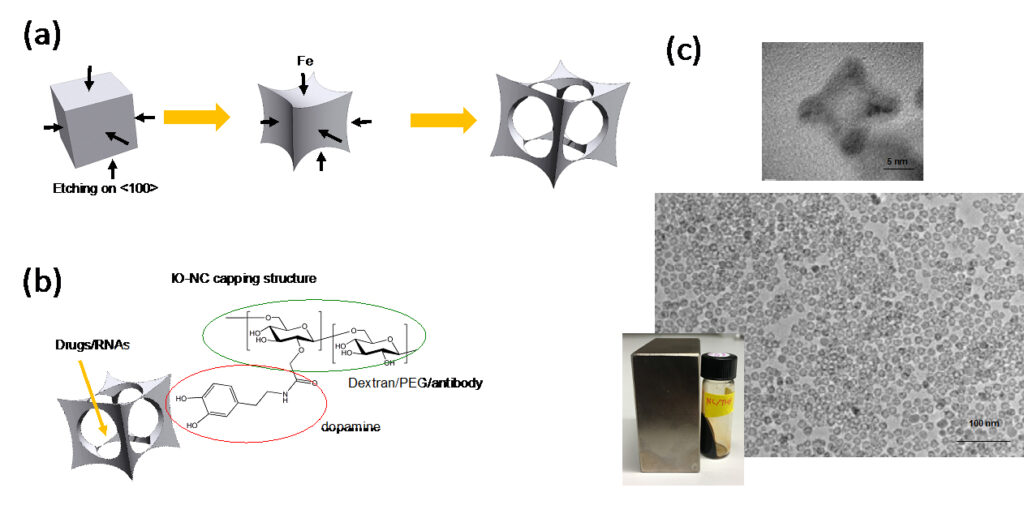 Figure 1. (a) Illustration of IO-nanocage fabrication process. Template cubic nanoparticles (MnO2 in this case) are transformed to iron oxide nanocages via Galvanic reactions (from left to right). (b) Structure of IO-nanocage. Capping molecules such as dextran and PEG (hydrophilic shell) can be conjugated with various moieties such as antibodies, dyes, and exosomes. (c) High resolution TEM (top) shows the cavity of nanocage. Low resolution TEM (middle) shows the monodisperse production, critical for high quality control necessary for medical applications. IO-nanocage is superparamagnetic (bottom), an important feature as MRI contrast agent.

For active targeting, IO-nanocages can be engineered to conjugate with organ-specific targeting proteins or exosomes. For example, when these IO-nanocages were coated by lung-tropic exosomes and related proteins, higher accumulation of IO-nanocages was observed in the lung of tumor-bearing mice. Based on Dr. Matsui and his team's previous studies in the structural and mechanical properties of exosomes (Nature Cell Biol. (2018) 20, 332-343), these fabrication processes fell into their expertise. Thus, this delivery platform could be applied to treat practically treat primary and metastatic tumors with both anticancer and reduced side effects, which has a significant impact in oncology.

Actually, this nanocage technology could have broader impact in medicine because the cage-shaped nanoparticles with a cavity could be applied as universal drug carriers for newly designed drugs or therapeutic RNAs/DNAs. Recently, magnetic IO-nanocages were discovered to undergo spinning motion in alternating magnetic fields (230 – 335 kHz) due to strong Brown relaxation phenomenon, and this spinning motion was applied to escape endosomes in cells and then release genes from nanocages (Fig. 2). It should be noted that the endosome escape of drug carriers to cytoplasm and/or nucleus before degradation by lysosomes is one of major issues for better therapeutic efficacy. Thus, IO-nanocages could also be effective to treat various diseases through future gene therapy as establishment of Cas9-gRNA delivery systems with IO-nanocages is underway. Iron oxide nanocages could also be applied as contrast agents for magnetic resonance imaging (MRI), enabling monitoring the drug delivery process in vivo when nanocages are used as drug carriers.

Exosomes and EVs, secreted from various types of cells, play a major role in intercellular communication and subsequent functional changes in effector cells. Their functions and organ-specific targeting depend on the packaged biomolecules (proteins, RNAs and DNAs), mechanical property and size. EVs interact with target cells through cell surface receptors, following endosomal uptake and cargo extrusion. This ability to transport molecules and to specifically target the receiving cells leads to the diverse therapeutic applications of EVs in medical areas such as cancer, inflammation, cardiovascular disease, wound healing, brain injury and hypertension. These intrinsic therapeutic potentials position EVs as ideal candidates in developing pharmaceuticals.

When EVs are further developed as practical therapeutic agents for future medicine, it is necessary to establish a simple methodology for enhanced EV generation while it is not currently available. This study introduces a novel invention using intercellular self-assembly (or polymerization) of synthetic peptides to amplify the generation of EVs. By simply adding short peptides to therapeutic cells, production of EVs in target cells was greatly enhanced as enzymes cleave specific moiety of peptide-inducing polymerization (Fig. 3). Cellular uptake of the peptide can be proceeded without special treatment. The self-assembled peptides generate artificial cytoskeleton, which can be visualized by a fluorescent tag on the synthetic peptide that turns on the light emission only when the peptide is polymerized. The peptide self-assembly could alter signal pathways with possible stress, leading to triggering an increase in EV production, although the detailed amplification mechanism is still under investigation. Recently, Dr. Matsui and his team have confirmed five cell lines on this effect based on peptide self-assembly, and for example, MDA-MB231 cells released exosomes in 10-fold increase by number when the parental cells were treated by the self-assembly of peptide.

Figure 3. Mechanism of effective gene delivery by iron oxide nanocage in alternating magnetic field (AMF) via efficient endosome escape: (a) RNA-loaded iron oxide nanocages enter cells via endocytosis. (b) AMF induces spinning motion of IO-nanocage with Brownian relaxation, leading endosome escape. (c) IO-nanocages then enter cytoplasm and released RNAs from IO-nanocage are delivered to cytoplasm and/or nucleus for the therapeutic effect. (d) TEM images of endosomes in B16-F10 cells before (top) and after (bottom) AMF was applied. In the top image, endosomes contained IO-nanocage. After these cells were treated with AMF (335kHz) in the bottom image, endosomes are teared, which leads to the escape of IO-nanocages to cytoplasm as depicted in (c).