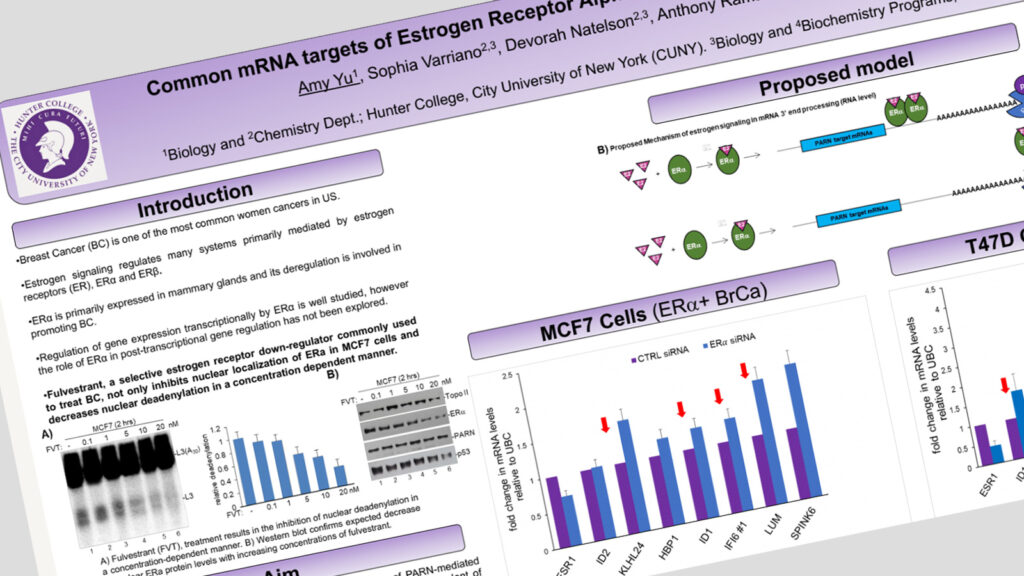 Breast cancer (BC) is one of the most common women cancers in the United States, approximately 1 in 8 women will develop invasive BC in their lifetime. The estrogen signaling pathway regulates the female reproductive system and is primarily mediated by estrogen receptors (ER). ERα is primarily expressed in the mammary glands and its deregulation is involved in promoting BC. While it is well studied how ERα regulates gene expression transcriptionally, the role of ERα in posttranscriptional gene regulation has not been explored.

Our preliminary studies indicate that ERα acts as an activator of PARN-mediated deadenylation, through the PARN/p53 interplay in the nucleus but independent of estrogen treatment, affecting gene expression in a transactivation-independent mechanism in BC cells. Inhibiting ERα function and nuclear localization by fulvestrant treatment decreases nuclear deadenylation. As deadenylation is the process in which the poly(A) tails of target mRNAs are shortened signaling mRNA degradation, we tested the functional overlapping of ERα and PARN analyzing by qRT-PCR the upregulation of mRNA targets in samples from different BC cells depleted of ERα or PARN expression. ERa and PARN have common mRNA targets, specifically ID1, KLHL24, and LUM genes, which are involved in cell invasion, metastasis, and angiogenesis in BCs, thus providing a functional connection between mRNA 3’ end processing and BC progression. The effect of this regulatory mechanism on cellular transcriptomes might provide further insight into new targets that contribute to tumor development and cancer progression, and might be used as therapeutic targets in BC.