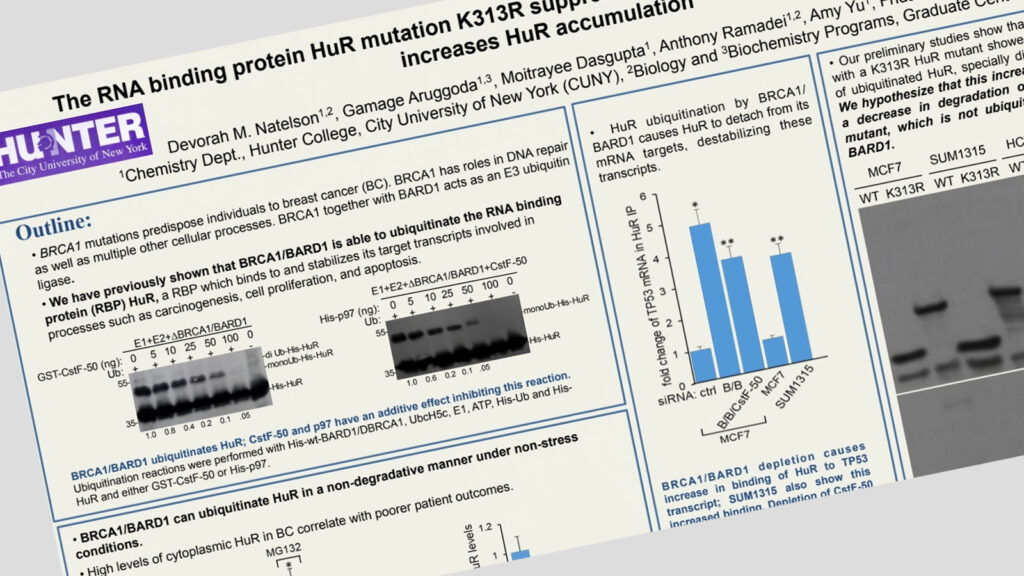 BRCA1 mutations strongly predispose individuals to breast cancer (BC) and make them more susceptible to developing Triple Negative Breast Cancer (TNBC), a form of BC for which there is a poor prognosis. Identification of new pathways is necessary to improve BC patient outcomes. BRCA1 has roles in DNA repair as well as multiple other cellular processes. Additionally, BRCA1 together with BARD1 acts as an E3 ubiquitin ligase. We have previously shown that BRCA1/BARD1 is able to ubiquitinate the RNA binding protein HuR under non-stress conditions. HuR is a major RNA binding protein which binds to and stabilizes its target transcripts. The mRNA targets of HuR are involved in processes such as carcinogenesis, cell proliferation, and apoptosis. High levels of cytoplasmic HuR in BC correlate with poorer patient outcomes, making HuR a potential target for cancer therapy. Our previous in vitro studies showed that BRCA1/BARD1 ubiquitinates HuR primarily at K313 in the RNA Recognition Motif 3 (RRM3) of HuR. Our preliminary studies show that cells transfected with a K313R HuR mutant have increased levels of ubiquitinated HuR. We hypothesize that this increase may be due to a decrease in degradation of the K313R mutant, which is resistant to ubiquitination by BRCA1/BARD1. Importantly, HuR ubiquitination by BRCA1/BARD1 causes HuR to detach from its mRNA targets, destabilizing these transcripts.These results suggest that BRCA1 mutation in BC patients may be inhibiting normal HuR protein turnover, causing an increase in HuR accumulation and abnormal processing of mRNA transcripts involved in carcinogenesis and tumor suppression.