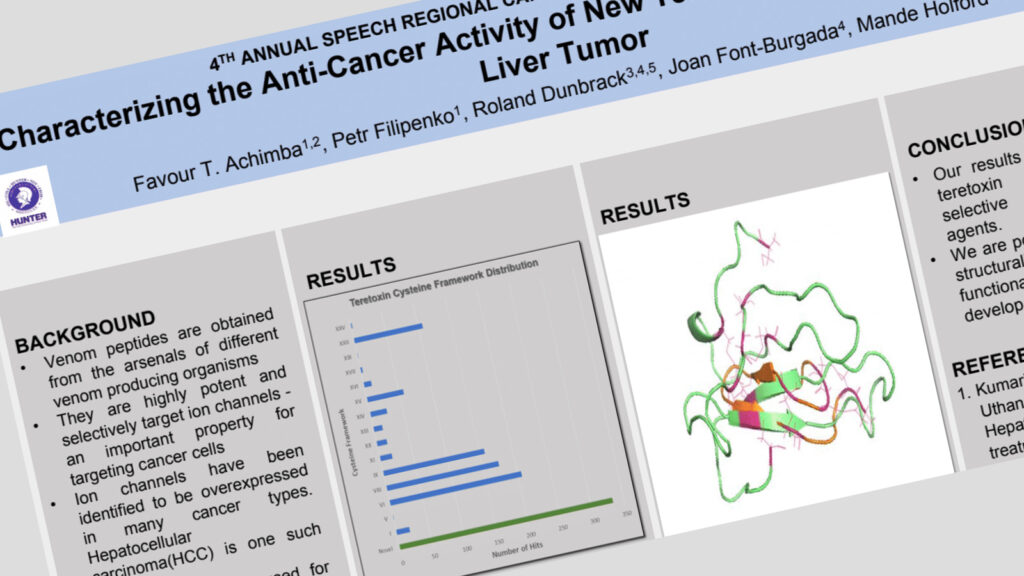 The regulation of cellular processes by ion channels has become central to the study of cancer mechanisms. Designing molecules that can target ion channels overexpressed in tumor cells is a promising area for finding selective cancer therapies. Although natural products have played a significant role in drug development, venom peptides are a largely untapped class of compounds. The exquisite specificity and selectivity of venom peptides for modulating ion channels and receptors highlights their promise for drug discovery and development. Hepatocellular carcinoma (HCC) is the most common form of primary liver cancer worldwide accounting for about 90% of liver-cancer related deaths. It is difficult to detect until it has progressed to the advanced stages resulting in high death rates. Sorafenib, a molecular targeted therapeutic, has proven effective in treating advanced HCC, but only improved survival rate by a few months and is cytotoxic to normal cells. Hence, there is a need for targeted therapy with higher specificity and less cytotoxicity to non-tumor bearing cells. Our previous studies showed the potential of terebrid venom peptide (Tv1) as a selective inhibitor for HCC tumors in 1MEA cell lines. These findings led to the working hypothesis that teretoxin peptides sharing a cysteine framework similar to that of Tv1 will have similar antitumor effects and interact in similar ways with TRP channels to exert the antitumor effect. This work will identify and functionally characterize the anti-tumor mechanism of action of Tv1 and other terebrid venom peptides (teretoxins) that target Transient Receptor Potential (TRP) channels overexpressed in HCC. From our library of 1157 teretoxin, we identified peptides with a similar cysteine framework to Tv1 and those with homology to published solved structures. Using trRosetta and AlphaFold we predicted the structures of the selected peptides. Peptides with a structural homology to Tv1 were then docked to various TRPC and TRPV channels overexpressed in HCC. Here we describe our initial results that validate the use of teretoxins to target overexpressed TRP channels in HCC to minimize or prevent cancer progression.