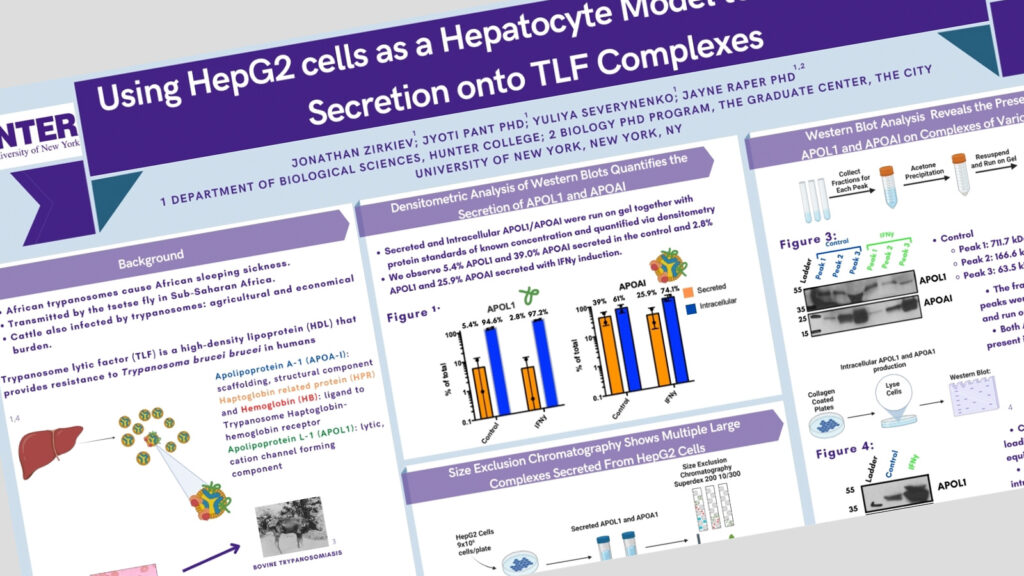 APOL1 is the lytic component of the high-density lipoprotein called trypanosome lytic factor (TLF). It protects against trypanosomes in humans and other higher-order primates. APOL1 has selectively evolved into variants called G1 and G2 in individuals of African descent. These variants are associated with increased risk of chronic kidney diseases, autophagy, and cancer. APOL1 in plasma is predominantly secreted from the liver. Here we used liver hepatocellular carcinoma cells (HepG2) cells to study the secretion of APOL1 and its assembly into the TLF complex. Our results show that APOL1 is produced and secreted by HepG2 cells. Upon induction with gamma interferon, the intracellular APOL1 production increases (90% to 99.8%). However, the secretion of the protein into the media decreases upon induction with interferon (10% to 0.2%). Size exclusion chromatography shows that secreted APOL1 is distributed among complexes of various sizes, from 63.5 kDa to 711.7 kDa. Based on these results we conclude that HepG2 cells can be used to study the secretion of APOL1 and assembly of TLF complexes (500kDa). In the future we intend to investigate the composition and trypanolytic activity of the secreted APOL1 containing complexes.