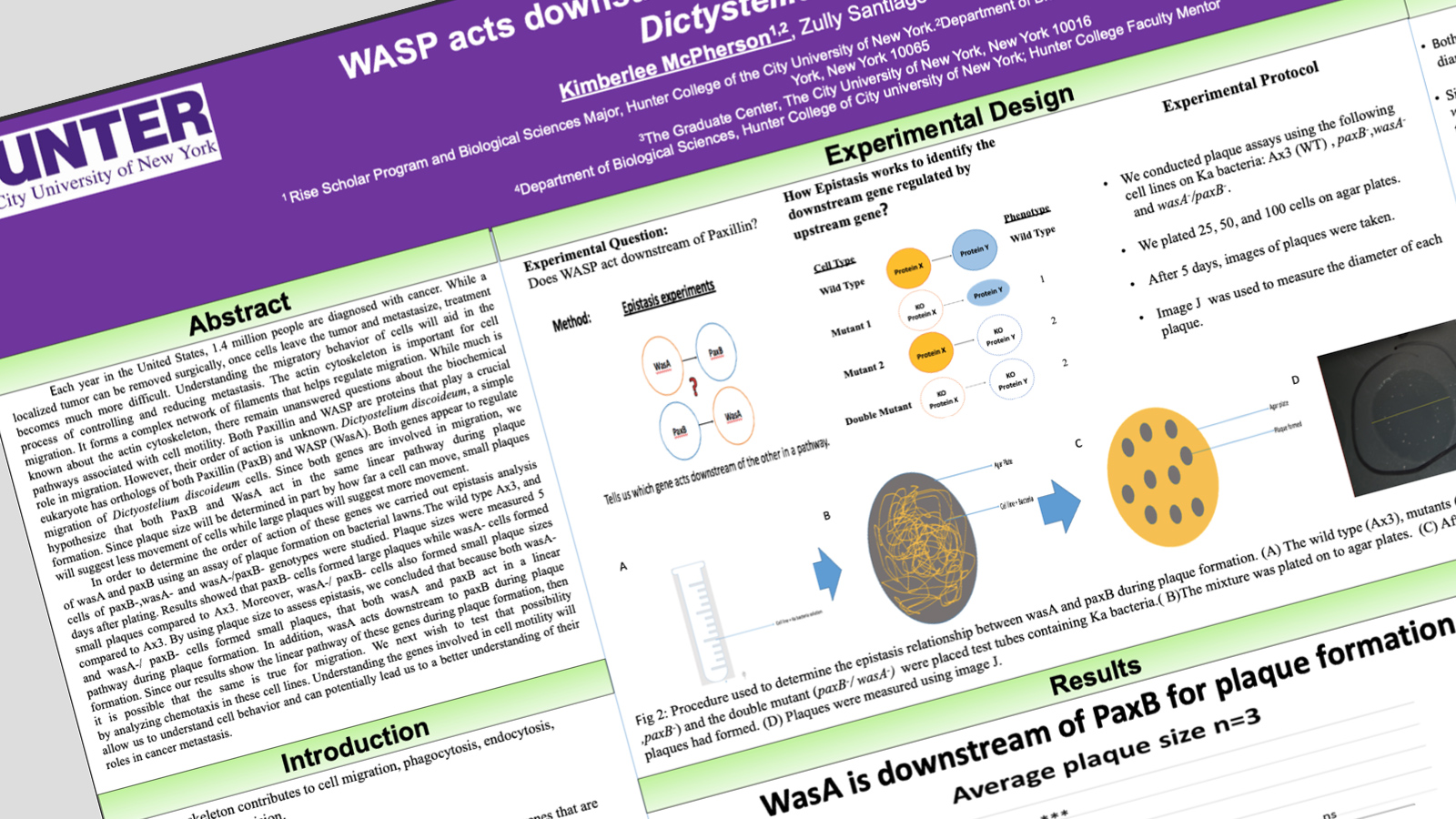 Each year in the United States, 1.4 million people are diagnosed with cancer. While a localized tumor can be removed surgically, once cells leave the tumor and metastasize, treatment becomes much more difficult. Understanding the migratory behavior of cells will aid in the process of controlling and reducing metastasis. The actin cytoskeleton is important for cell migration. It forms a complex network of filaments that helps regulate migration. While much is known about the actin cytoskeleton, there remain unanswered questions about the biochemical pathways associated with cell motility. Both Paxillin and WASP are proteins that play a crucial role in migration. However, their order of action is unknown. Dictyostelium discoideum, a simple eukaryote has orthologs of both Paxillin (PaxB) and WASP (WasA). Both genes appear to regulate migration of Dictyostelium discoideum cells. Since both genes are involved in migration, we hypothesize that both PaxB and WasA act in the same linear pathway during plaque formation. Since plaque size will be determined in part by how far a cell can move, small plaques will suggest less movement of cells while large plaques will suggest more movement.

In order to determine the order of action of these genes we carried out epistasis analysis of wasA and paxB using an assay of plaque formation on bacterial lawns. The wild type Ax3, and cells of paxB-,wasA- and wasA-/paxB- genotypes were studied. Plaque sizes were measured 5 days after plating. Results showed that paxB- cells formed large plaques while wasA- cells formed small plaques compared to Ax3. Moreover, wasA-/ paxB- cells also formed small plaque sizes compared to Ax3. By using plaque size to assess epistasis, we concluded that because both wasA- and wasA-/ paxB- cells formed small plaques, that both wasA and paxB act in a linear pathway during plaque formation. In addition, wasA acts downstream to paxB during plaque formation. Since our results show the linear pathway of these genes during plaque formation, then it is possible that the same is true for migration. We next wish to test that possibility by analyzing chemotaxis in these cell lines. Understanding the genes involved in cell motility will allow us to understand cell behavior and can potentially lead us to a better understanding of their roles in cancer metastasis.

Email questions and comments about this abstract to kimberlee.13@hotmail.com.