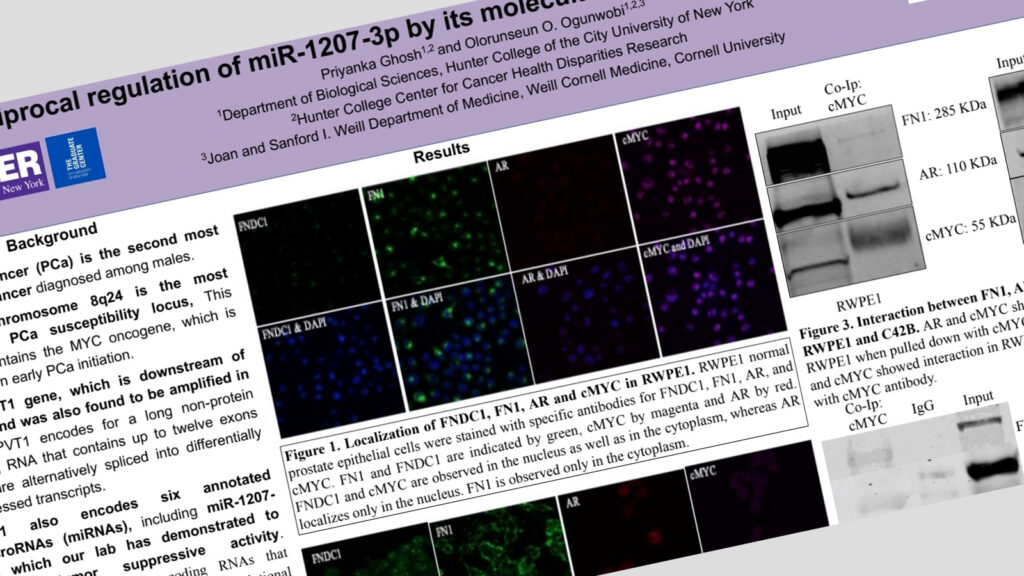 Prostate cancer (PCa) is the second most common cancer diagnosed among men in the United States. Human chromosome 8q24 is the most important PCa susceptibility locus. This region contains the MYC oncogene, which is involved in early PCa initiation. Downstream to MYC is the PVT1 gene, which is often amplified in PCa. PVT1 is a non-protein coding gene that encodes six annotated microRNAs (miRNAs), including miR-1207-3p, which our laboratory has previously demonstrated to be a significant modulator in PCa. We revealed that miR-1207-3p is significantly underexpressed in PCa cells and histologically confirmed PCa tissues, when compared to normal prostatic cells and tissues and that miR-1207-3p has tumor suppressive activity in vivo. Moreover, we discovered that miR-1207-3p directly targets fibronectin type III domain containing 1 (FNDC1), which was found to be overexpressed in PCa cells and concomitant overexpression of (FN1)/androgen receptor (AR)/c-MYC. In an effort to better understand the role of FNDC1/FN1/AR/c-MYC in PCa progression we examined the interaction between FNDC1/FN1/AR/c-MYC through coimmunoprecipitation and found direct physical interaction in tumorigenic cell lines as compared to the non-tumorigenic cell line. We also examined the spatial localization of the FNDC1/FN1/AR/c-MYC pathway by performing immunofluorescence staining in PCa cells. Single staining analysis revealed that FNDC1 and c-MYC localize to the nucleus and cytoplasm while AR localizes to the nucleus and FN1 localizes to the cytoplasm in PCa cells. However, in normal prostate epithelial cells FNDC1, AR and c-MYC localize to the nucleus whereas FN1 localizes to the cytoplasm. These results suggest that miR1207-3p may be affecting the interaction between FNDC1/FN1/AR/c-MYC. However, our findings show that miR-1207-3p has no effect on this interaction. Future studies will assess the role of AR in this interaction. Thus, understanding this molecular interaction can reveal additional insight into the role of AR in PCa progression.

Email questions and comments about this abstract to pghosh1@gradcenter.cuny.edu.