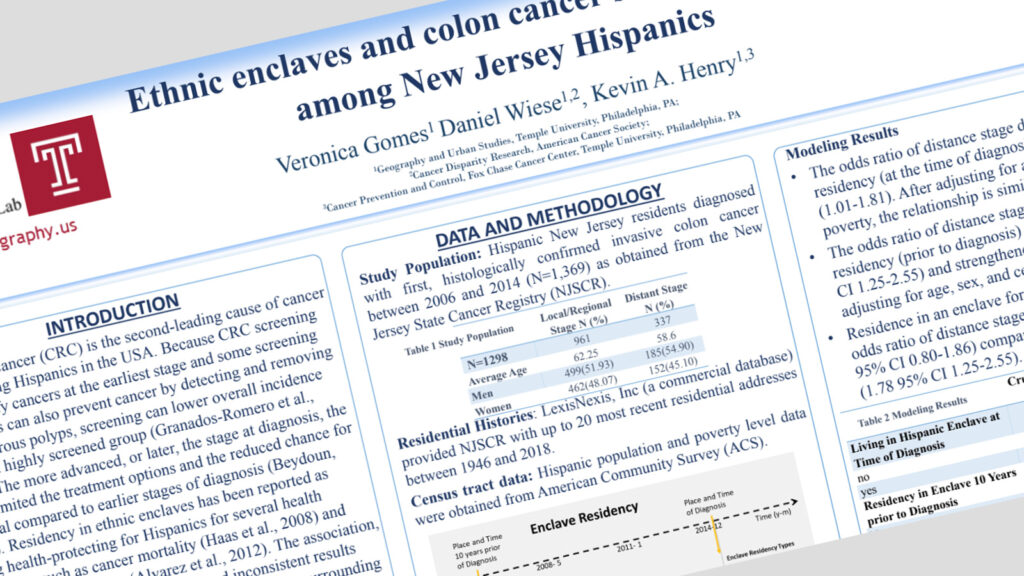 Ethnic enclaves are culturally distinct neighborhoods with high concentrations of individuals of the same ethnic origin. Study findings are inconclusive on whether living in ethnic enclaves serves as a risk or protective factor of cancer-related outcomes. This study aims to examine associations between colon cancer stage at diagnosis and living in an ethnic enclave. The study population includes adult Hispanic New Jersey residents with their first, histologically confirmed invasive colon cancer diagnosed between 2006- 2014 (N = 1298). Cases were linked to residential histories and limited to cases with at least 10 years of residential history (N=1072). Sixty-five percent of the cases were late- stage (regional + distant) and 26 percent were distant stage. About 63.5 percent of the late-stage cases lived in an enclave at the time of diagnosis, 22.4 percent of the late- stage cases lived in an enclave for the 10-year period and 30.5 percent never lived in an enclave. We did not find significant associations between late-stage diagnosis and living in an enclave. However, when we examined the distant stage, we found residence in an enclave for the entire 10-year period resulted in lower odds of distant-stage compared to never living in an enclave (Odds Ratio 0.6 95%CI 0.42-0.85). Among Hispanics in New Jersey, enclave residence was not associated with late stage but was associated with distant stage. Additional research is needed to determine whether the length of residency is protective.